Posted on November 24, 2020 by Laura Graham under Richie Doodle
Leave a comment 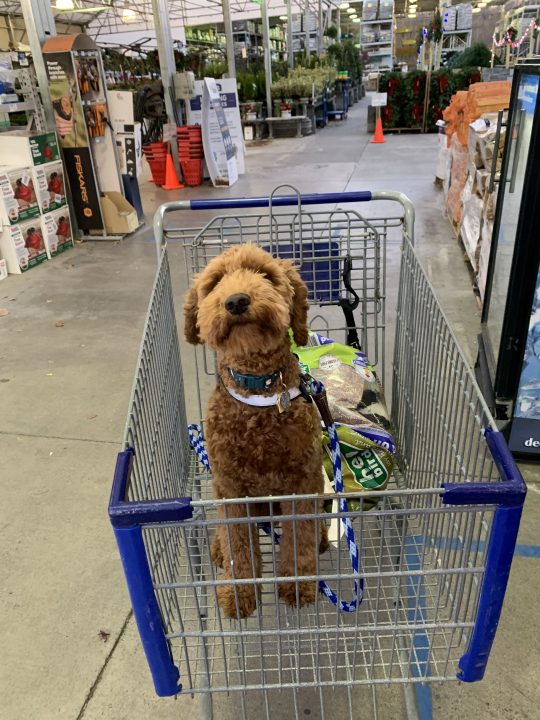 Now that I’ve had all of my shots, I can explore the world a little more.  Laura and I are going to some place called Lowe’s tonight so I’m excited to see what it is.  When we got there she told me that I would have to ride in the buggy but it had plenty of room so I didn’t mind.

We had such a good time!  As we walked in, the lady in the garden department wanted to take my picture and we got to know each other a little before we moved into the store.

Everywhere we went, people came up to us and wanted to either pet me or have their picture made with me.  They told us their dog stories too and showed us pictures of their fur babies.  One man who works at Lowe’s has a labradoodle and I think his dog must get into things like I do.  Whatever we can get into our mouths is a delicious thing — especially peanut butter. That’s the best treat ever.

The only thing that hurt my feelings would be if someone just walked on by and didn’t even acknowledge my presence.  If I could speak, I would want to say, “don’t you think I’m cute and don’t you want to pet me?”   There were even a few who asked if I am the puppy on the billboards.  They aren’t sure because I have grown so much since that photo was made.  I was two months old and weighed about 7 pounds then and now I’m 5 months old and weigh a little over 20 pounds.

On our way to the car, a young man stopped us and wanted to know where I came from because he thought I was the most beautiful golden doodle he had ever seen.  It’s my Paddington Bear face that wins them over.  Laura told him about Pigeon Forge Doodles and told him they have a website and are on Facebook with contact information.

As we are now reflecting on Thanksgiving, I want to tell each of you how thankful I am to be living in the greatest country ever and that people are so nice to me.  I am a friendly puppy and love to be around people.  God made me that way and He has already blessed me so much.  For that I am very grateful!

HAPPY THANKSGIVING TO YOU AND YOURS!