Posted on August 31, 2020 by Laura Graham under Richie Doodle
Leave a comment 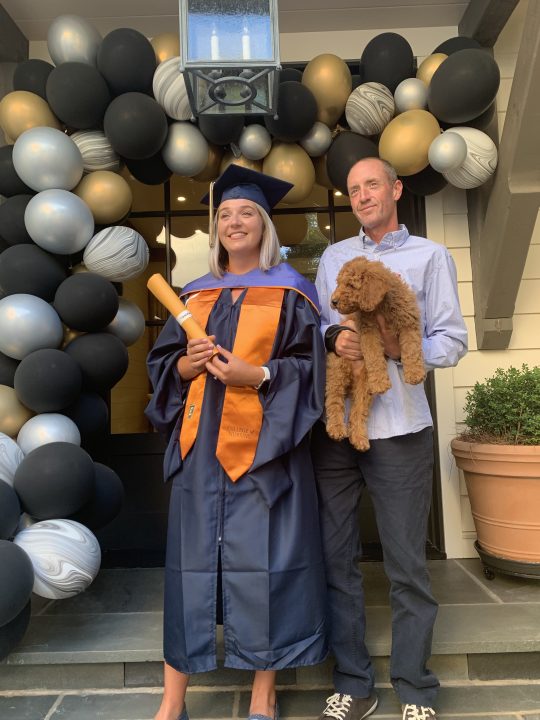 Oh my goodness!  I have had such an exciting week!  I went to my first graduation ceremony!  I have had so many firsts since coming to Johnson City that I don’t know what to do and they have all been so different and so much fun.

I am 3 months old today, Tuesday, August 25th, and the time is going by so fast!

I seem to be growing every day and finding that I have a bark.  Laura says that jumping on someone is a no-no and when Laurie comes back we are going to work on the bark and jump.  I really like Laurie!  She knows how to get a pup to do what he’s supposed to do.  She also likes to give treats when I mind her.  She’ll be back in a week so the rest of the bunch better get on the ball and work with me – especially Laura.

Last night I attended GriefShare and had a wonderful time with all of those wonderful people who attended.  They really like me and gave me hugs, pats, and when I laid on my back; they would rub my belly and I really like that.  When the video played and Chris had the discussion, I sat on a couch with Laura in the back of the room and chewed my rubber bone and took a nap.  I really like to help make people feel better when they are sad.

The most exciting thing I did last week was attend Laura’s granddaughter’s graduation from ETSU Family Nurse Practitioner School.  With Covid still hanging on with us, her parents had a graduation ceremony at their house and it was so much fun.  Kelly called Laura last Saturday afternoon and invited me to attend!  I couldn’t believe it when she told me that I was invited too.  We took my crate so I would have it if I got tired or needed to be put up if I was rowdy but I was so good that everyone there petted me and handed me around.  Laura and Carolyn Broyles, Caroline’s other grandmother were seated on the first row so she didn’t even see me for about an hour.  In fact, when the photos were made with Caroline after the graduation, her Uncle Ryan Broyles was holding me.  Imagine!  I went in my crate and napped while they ate supper but after supper – it was chaos!  There were four dogs at the party.  Caroline and Preston, her husband, have Remy, a Frenchie bull dog who I really liked because he was

small like me and they have Ranger a  golden retriever who could have cared less about us because all he wanted to do was run after balls thrown by Preston, Jack Rhea and Chip Rhea.  He ran for over an hour and didn’t even slow down.  I was so amazed by that.  Then, there was Carson the corgi who is Kelly and A.R.’s dog.  Carson scared me because he let me know immediately that it was his house and he would decide if he liked me or not.  I sat in a lot of laps for awhile and once when Laura had me, Remy got up on the seat beside me to let me know that he liked me and wanted to be my friend.  That made me feel better and then I was able to relax and we played.  By the end of the night, Carson was being nice to me so the evening ended on a high note for dogs and “parents.”

I like their yard so hope they invite me back another time.

Congratulations on your accomplishment Caroline.  You can see her with her Uncle Ryan and me after the graduation ceremony.  I was the only dog invited to that part of the festivities!

That was a lot of what I did last week so am signing off for now.  Wish me luck, everybody as I grow and learn!  It’s not easy being in training but I know it’s something I must do to have my job here plus I love everyone because they spoil me for I am the baby!

Have a good and safe week!